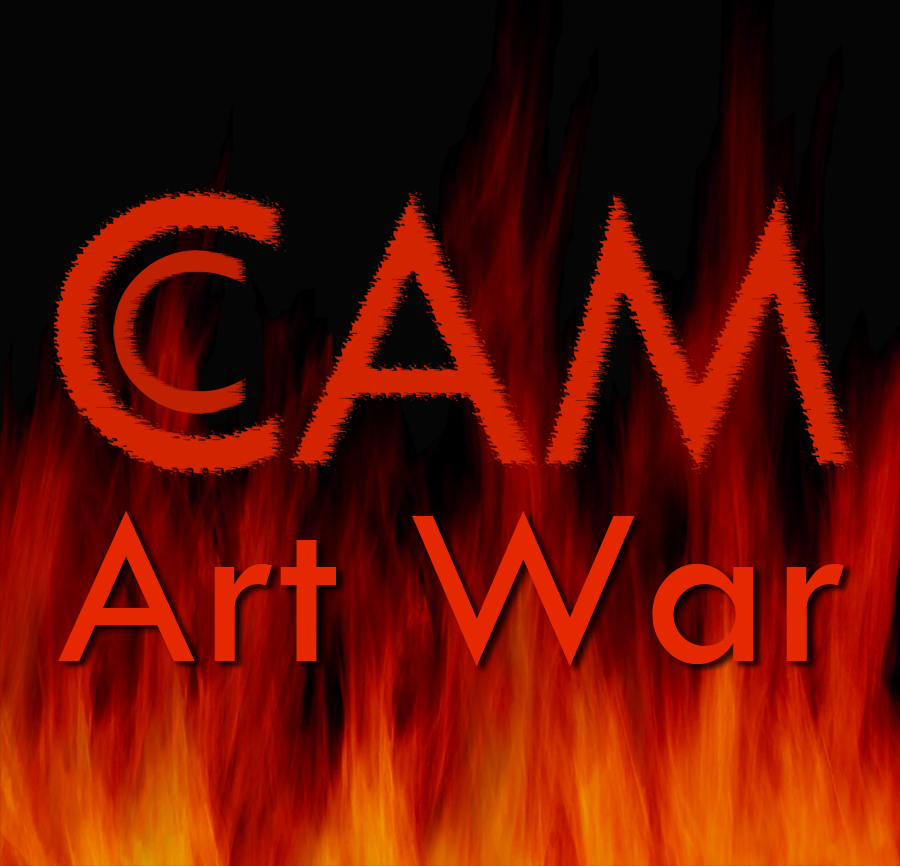 CAM Art War | The revolution of the artists

The final aim of artistic production is the work of art, unique and untouchable, an extension of human self-consciousness meant as an understanding of the human condition in contemporary society.
To destroy it with fire means to deny its intended function, almost an act of vandalism modifying its original meaning and turning it into means of social protest. When artists to do with a sense of solidarity, this gesture becomes a protest against the status quo. CAM Art War is peaceful revolution engaged in by artists and the intellectuals to fight against homogenization the cultures.
We live in a period of heavy social and political movements. Peoples protests, especially so in this historical period. It is a movement against the ravages of unbridled capitalistic greed to and an outcry for freedom against their repressed exasperation.
The longing for freedom is not just for populations under dictatorship but also for the social classes oppressed by a financial instability conditioning their lives. New enemies came out, banks, financial groups, economy lobbies leading and monopolizing the market.
The same is happening in the world of art and culture; in the contemporary art world the power is in the hands of bank foundations, huge galleries and super collectors. Auctioneers control art biennials and big fairs meanwhile museums boards of directors are collected through “political” and strategic agreements.

Governments, powerless or sometimes in collusion, encourage the powerful and diminish democratic cultural and scientific research. The economic crisis that we are all experiencing has squeezed democracy into the domain of the economist, the banker, and the Chancellors of Exchequers who have created conditions that have become painful for the people. Their decisions based on right wing economic arguments become an unsustainable burden for crisis economies. All they seek is a cash profit that benefits the wealthy few.
Dealings in the arts is accomplished by powerful media structures, related to those huge financial centres which support exhibitions and spaces close to ribald free market economic philosophy. Nothing can rise from the bottom, everything is Merchandising, Benefit, Marketing, entire generations of artists are just figureheads with no future. Gone is the notion that democracy is a function that raises the wellbeing of the populous. We are left with a wasteland inhabited by an under-class.
Museums, libraries and experimental theaters need capital to function. The low common denominator of the market that responds to instant gratification are easy outlets for the quick buck philosophies of both government and private sponsorships.
Therefore, CAM museum, operating in on one of the most degraded areas of Southern Italy, conveying social messages through art, like the fight against organized crime and that way of thinking; proposing research and experimentation as an alternative to the star system and to the “IKEA Museums”, proposes a challenge with a big international performance, entitled “CAM Art War”.
The participating artists will realize, though in different places but with the same goal, a meaningful gesture of protest against the situation of art and culture, a “cultural revolution”.
Artists are acting as they would never be expected to do in a civil society, they are burning their works, the product of their creation, the way Governments, finance and multinationals are doing with their dreams.

The story of CAM
watch the video